Deka Village, Elwak district in Gedo Somalia has been the home of 38-year-old Sahara Adan Dhicis for the past 8 years. A widow and the sole breadwinner for her 8 children, Sahara relies on her small herd as the only source of income for her household. For residents of Deka village, wealth has always been measured by the size of one’s herd, their livestock is a crucial source of food (milk) and a mobile bank that can be converted into cash for health expenses, school fees, etc.

For years drought and animal ailments have been the worst mishaps that could manifest to this community. “It was so distressing, watching as our animals die and there was nothing we could do about the diseases. We could barely get any milk for the children,“ Sahara reflects. Diseases not only claimed the lives of animals but also undermined their productivity, resulting in less milk and meat and also lowering their market prices.

“When our livestock got sick we would give them medicine by guessing the diseases they were suffering from and most times it would worsen the condition because we would give them wrong treatment or misuse the drug quantity, “Says Sahara

Lack of animal health services in the region has crippled the efforts of increasing productivity of pastoralists livestock and more so for the vulnerable households such as IDPs. To intervene in this dire situation,  NAPAD together with the German Federal Foreign Office (GFFO) and Medico International has trained and equipped 15 Community Health Workers with skills to diagnose and treat livestock diseases. The project seeks to reduce livestock morbidity, thereby improving productivity for household consumption and household income. This intervention has seen 450 households being provided with veterinary care of 28,000 animals.

“My animals were treated during the free treatment drive in our village. The animals were given treatment for worms, pneumonia, and parasites. Our animals are now healthy and thriving despite it being the rainy season when diseases are quite rampant. My children now drink more milk,” says a beaming Sahara. “I thank NAPAD for the support they have given our community”. 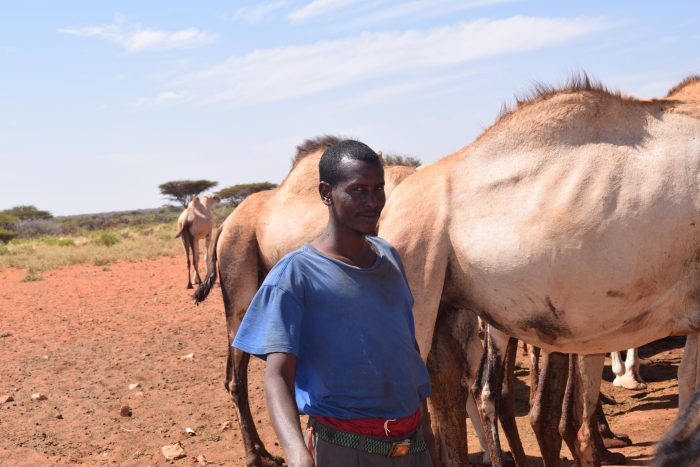 Ahmed Hassan Hersi, 39, boasts 26 goats and 58 camels which besides being his pride are his main source of income. Life for the father of seven entails looking after his family as well as his 84 livestock in equal measure. Providing pasture and water for his animals is what Hersi lives for in Inagabile, a village about 70km away from Abudwak District sequestered in Somalia’s Galguduud region with limited access to transport. Water is scarce and the small water tank in the village is rarely sufficient for both human and livestock consumption.

“In many occasions, I had to fetch water for my family and livestock from the nearby villages 6km from here, and when the drought hits, the animals are first to succumb to thirst and hunger…”

“In many occasions, I had to fetch water for my family and livestock from the nearby villages 6km from here, and when the drought hits, the animals are first to succumb to thirst and hunger. The cows are usually the first to die, then the goats. The Camels can survive for a while,” says Hersi.

Like Hersi, approximately 300 households living in Inagabile Village largely depend on their livestock. Intervening for the residents, NAPAD with funding from its partners, Medico International and the German Federal Foreign Office (GFFO) constructed two animal troughs, a water kiosk, water tank and a solar pump.

“We didn’t have money to buy fuel and most of the times the generator was shut off due to lack of fuel,” says Hersi.

The project which sought to protect livelihoods and provide water sanitation and hygiene (WASH) interventions for vulnerable communities provided support for Inagabile residents between June 2019 and February 2020. By using clean solar energy to pump water for about 300 households and 15,000 livestock, Inagabile residents now have access to 60,000 liters of clean and affordable water everyday.

“There’s plenty of water now within the village. I never thought I would go back to being a farmer…”

“There’s plenty of water now within the village. I never thought I would go back to being a farmer, but now I am considering another source of income through farming.”

For families like Hersi’s, the construction of  new water troughs, water tank and the water kiosk not only means access to safe, clean drinking water, but is a sign that their home town is starting to build.

“The situation here is very good now, the water issue has been resolved and I can start working on the basic needs to support my family. I thank God that through NAPAD in partnership with its donors that our prayers have been answered. I urge you to continue the goodwill and help more people to get access to clean and affordable water,” says Hersi.

For most, a phone beeping usually indicates a message alert or some type of notification, but for Farhiyo Ali Diriye the beep will determine whether she will have a meal for dinner or if her weakly children will get medicine they require. Diriye is a refugee living in Kulmiye IDP Camp with her eight children.

After prolonged drought periods in Somalia, vulnerable and disaster affected IDPs and host communities are put at risk. These communities are unable to protect their livelihoods and those of their livestock resulting a diminished nutrition.

Nomadic Assistance for Peace and Development (NAPAD) with support from Medico International (MI) and the German Federation Foreign Office (GFFO) has been working to provide emergency relief through cash transfers and protection of livelihoods for vulnerable IDP and host communities in South Central Somalia.

To ensure that vulnerable communities in South Central Somalia become food secure, NAPAD with support from GFFO and MI conducted unconditional cash transfers to 1,700 IDP households and 800 host community households in Galgudud and Banadir regions. A total of $124 to 2,500 households that would be transferred for a period of three months enabled the beneficiaries to meet acute food needs and other urgent needs.

Diriye, one of the beneficiaries who received the cash says, “I am extremely glad to receive this money at a time of so much need. As a mother looking after 8 kids, I didn’t have anything to feed them with leave alone school fees, medicine or a permanent shelter. I can’t express in words how grateful I am.”

Besides meeting the urgent and basic needs of the vulnerable communities, livestock which are the lifeline of the pastoral-oriented communities were protected. A total of 900 households in Galgadud received 10 bags of animal feeds each for a period of one month. The distribution ensured that a total of 18,000 livestock are protected during the drought-stricken period.

As part of the efforts in securing the pastoralists livelihoods in Galgadud, livestock treatments of 35,200 animals and rehabilitation of 8 watering troughs for animals is ongoing.

Targeting a total of 7,970 households in South Central Somalia and Mandera, Kenya, the project which is set for completion in 2020 extends to strengthening hygiene and sanitation capacity of schools and health facilities, and improving nutritional status of IDP and host communities through poultry training and rearing of chickens in 450 households.

Herds of cattle and camels some with prominent ribcages shepherded along dusty roads is not an uncommon site in Abudwak District, Somalia. Due to natural calamities and environmental degradation, pastoralists are forced to migrate from time to time in search of water and pasture. Whilst solving one problem, other challenges crop up which threatens livelihoods of the nomads.

The movement of pastoralists from one area to another elicits challenges like conflicts arising from the scramble of limited grazing areas and watering points. Most of the time however, conflicts are resolved and the pastoralists come to some form of agreement.

A threat that lingers however is the spread of diseases brought about by animal movement. Potential spread of lethal animal infections such as small ruminants plague (Peste des Petits Ruminants – PPR), sheep and goat pox and Foot-and-Mouth Disease (FMD) as well as non-lethal diseases such as infestations of internal parasites threatens the livelihoods of pastoralists.

To secure their livelihoods, Nomadic Assistance for Peace and Development (NAPAD) with support from the Somalia Humanitarian Fund (SHF) treated over 18,000 animals belonging to 600 vulnerable IDP and host communities’ households.

The treatment conducted between July and August 2019 involved deworming, hoof trimming, and giving supportive multivitamins to weak animals. The ailing livestock were treated with a broad spectrum antibiotics and a dosage of multivitamin. The community were very elated by the intervention to protect their livestock assets which they were in the verge of losing due to illnesses.

“My goats were almost dying and I had no money to purchase drugs. The treatment exercise came in at the right time when there was an outbreak of Pneumonia among small ruminants. We thank God that through NAPAD our livestock were treated,” says Hassan Abdullahi Shire.

Beneficiaries like Hassan have since reported improved health and body mass of their animals following the treatment intervention. Their livestock have recorded increased milk production and can even fetch good prices at the market thus securing their livelihoods.